In my last post, I summed up the progress of my game up to current times and then explained the next couple of pieces that I’d be tackling. Now, I’ll go over these pieces in detail and what the status is on everything.

Previously, if you were to try and do a wall jump (pressing the jump button again while touching a wall and being in air), it would add a force in the direction that the player is facing with no restrictions at all. This essentially allowed for spamming the jump while facing a wall to scale up the wall (…which is not intended). The refinement that I made was to only allow wall jumping if the player is facing far enough away from the surface that they are jumping from. Let me illustrate: 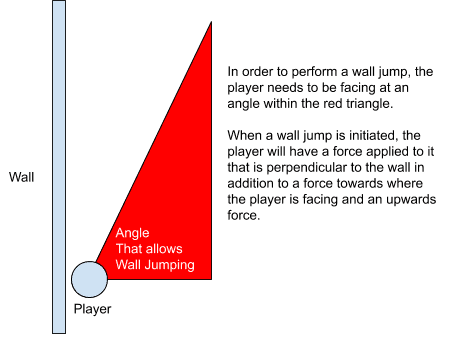 I have added in a very very basic AI Character into the game. It is basically the same character as you (same movement and attacks) and has the ability to sense nearby players in their field of view and will attack until they die, kill you, or run out of power (Actually they will still try to attack even if they are out of power but it just won’t do anything… I add a fix for that later). Here is a visual of what the AI is seeing. 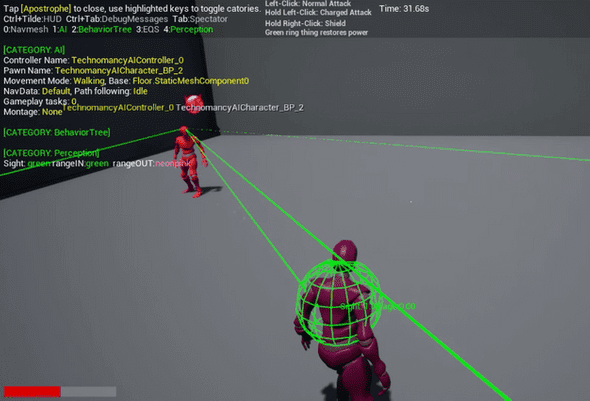 And here are the deconstructors that freed up the memory:

When the TMap of hexagons are called to be deleted, these relevant deconstructors are called.

Since I’ve worked out the base of the main game mechanics (movement and attacking and such), the next couple of things I will be working on are more in the visuals and world-building realm.

First, I’ll be making a better player model that will better represent what the final character will look like. After that I’m going to try and build what would be considered the starting area of the game. The style I’m going for is going to be a futuristic world that has fallen into a wasteland after the results of some apocalyptic or dystopian event. Finally, I’ll be adding a game menu that will later be used for hosting and joining multiplayer games.

As Always, you can see the latest updates for yourself by downloading the game on the homepage.